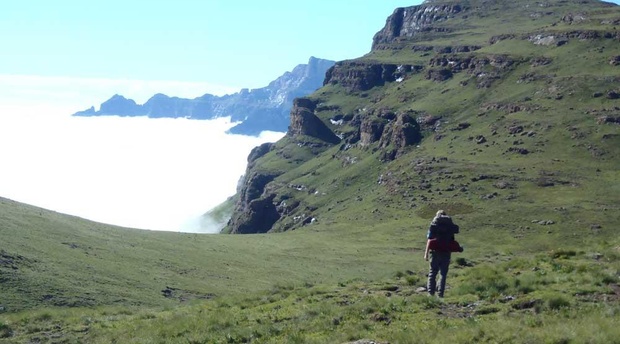 There are many great day hikes & walks in the Drakensberg approachable from Inkosana Lodge near Champagne Castle. They include Bushman painting sites. The staff at Inkosana Lodge will give you all the advice you need for day trips in that area and also for the whole of the Drakenberg range.

The Monk’s Cowl area is set around the Mpofane river valley, at the base of some of the Drakensberg’s most spectacular peaks. Day hiking in the park is done on well-defined and maintained trails, and appeals to a wide variety of fitness and experience levels.

If you’re looking for a good, easy walk, try the Hlathikulu forest trail as it winds through indigenous forests and the spectrum of Drakensberg wild flowers. Rest in the mist at the base of the magnificent Nandi’s Falls and explore the pools along the Mpofane river.

Another great day hike takes you up past the sandstone rock faces of the valley to the grasslands at the base of Cathkin peak where Rhebuck and Eland graze. Bring your binoculars to focus in on the wide selection of bird life.

For very fit, experienced and motivated hikers, there are two mountain peaks can be reached on day hikes.

Rock scrambling at the end of a four hour ascent will put you on the top of Sterkhorn (2970 m) — a stone’s throw from mighty Catkhin peak and perched over the Mwhlazini river valley. The views are fantastic and you’ll be able to see the Devil’s Tooth at the Amphitheater in the north and Giant’s Castle in the south.

Even harder is the 10 hour round trip that will take you up to the plateau of Champagne Castle (3337 m), one of the highest mountains in the Drakensberg. Here you can rest at the top of a 1000 m drop and watch rare bearded vultures circle before heading back down Gray’s Pass.

Additionally, Inkosana is within short driving distance of other great day hiking regions of the Drakensberg:

The Cathedral Peak area is defined by a freestanding set of peaks extending from the escarpment, and is a 45 minute drive from Inkosana Lodge. Try the day walk to Rainbow Gorge where the spray from waterfalls form beautiful rainbows. Hard-core hikers can try the day hike to the top of Cathedral Peak (3007 m), one of the best day walks in the Drakensberg.
The Injasuthi area holds the highest peak in the Drakensberg and is especially notable as having one of the best sites of Bush men rock art in the area. This art can be explored with a guided walk to Battle Cave, which displays a battle scene between two Bushmen tribes. Injasuthi is only 45 minutes by car.
Royal Natal National Park is 90 minutes north and lies at the northern end of the Drakensberg range, at the base of the Amphitheater. Day hike up the beautiful Tugela river gorge, or drive an additional hour and walk up to and along the top of the escarpment to the Tugela falls, second highest waterfall in Africa!
Giant’s Castle is another great site for Bushman rock art, with the caves only a 1.5 km walk from the entrance gate. Here you’ll also find a museum which recreates Bush men life. Serious hikers can reach the top of the Drakensberg escarpment via Langalibalele Pass. 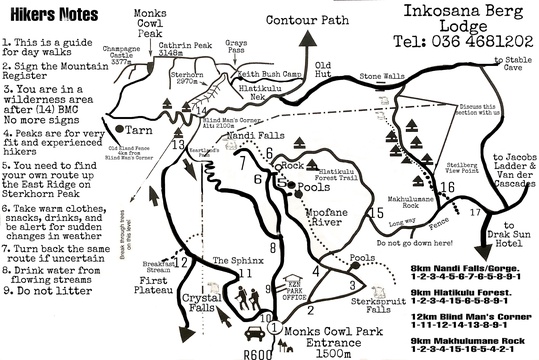 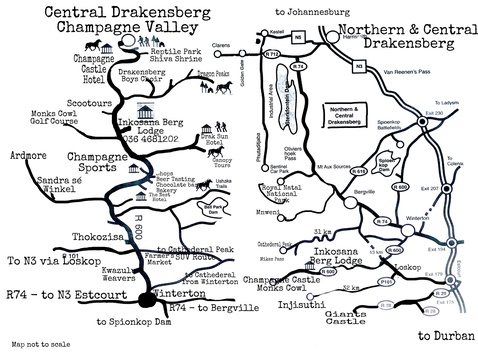 Hike begins at Monks Cowl (1480m), we will pass Sphinx and Crystal Falls and head up to Blind Man’s Corner (2100m). This 5.5 km walk is rewarded with beautiful views from the little berg. We shall return to Monks Cowl via Keartland’s Pass.  A total of 11km under 6 hours.

Main Caves is situated in the Giants Castle area.  Ninety minutes drive from Central Drakensberg.  The setup of a museum in a cave.  Interesting 45 minute guided tour.